Elephant waterfall angry white water foam, as mourn for him and her Lang - Biang that day.

According to legend, ancient, wild animals loved Biang - the girl's beautiful gentle tribe S’RE. Hearing this coming Biang "arrested her husband" as he Lang - a handsome chiefs and brave Latvian tribes. Both the region's forest elephants La Ngu Thuong glad, and they hustle to a wedding together. Unfortunately, the location to capture elephants now hear bad news: Lang and Biang had died. The wedding becomes a funeral, prompting elephants for several days and nights screaming and then died and turned to stone at the foot of the falls. Mercy elephants, the mountain Lang Biang cry out day to day. His tears flow down stream to blend into a cold shower, pat the elephants. Particularly largest elephant herd 2 of the La Ngu Ha Lang was spared his past and about the wedding, but when the news came that the foot of Prenn Pass and also collapsed into 2 mountains in early prostrate direction on top of Lang Biang. That's the Elephant Mountains now ...

Elephant cried bitterly, then died and turned to stone at the foot of waterfall

Lieng Rowoa Falls (waterfall Elephant) is located in the town of Ban Nam, Lam Ha district, 25km from Da Lat city southwest. Although located on the town but still damn waterfall unspoiled charm. From afar, the sound echo back the water, the sound of waterfalls like cries, solicitation: A stream of water from upstream poured billowing, suddenly fracture, then pour into the abyss with a higher degree of 30m, about 15m wide . From above looking down, like a waterfall hun smoking white silk connects heaven with earth. Then, when the sun shines through each water jet, waterfall painting Elephant shone like the shimmering colors, fanciful, smoke, fog fly lost in fairyland.

From above looking down, waterfall fuzzy white like a silk connects heaven with earth

To foot waterfall down, you have to pass nearly 150 stairs winding: When is the stone steps on a steep cliff, while the small board on the suspension bridge protruding edge of the abyss. Far side is ancient trees hundreds of years old, stems and branches tangled vines make Elephant waterfall becomes mysterious. 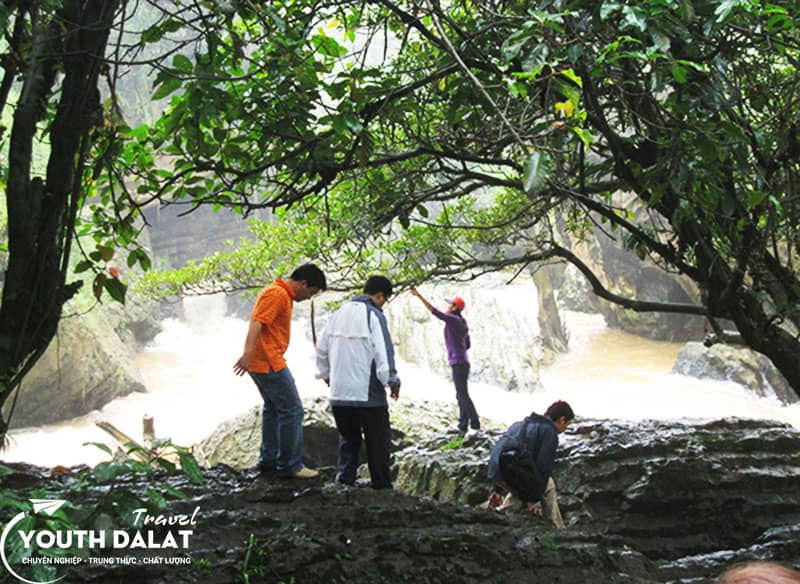 Falls way down the slippery, hard to go

From above looking down at the foot waterfall, large and small rocks like elephants are joking, playful fountains came together, plus the loud cries echo from expectations waterfall, making a racket all around quiet space. When down to the foot of the waterfall, behind the waterfall spray white is launching the Bat Cave is deep dark mysterious dim. Roots and tangled vines intertwined forming a passageway into the cave very strange and bizarre. The deeper, the darker the Bat Cave and cold to give visitors a sense of interest and curiosity watching.