The Palace III of the emperor Bao Dai

Visiting the Third palace of Bao Dai, you’ll be able to enjoy the remaining vestiges of the royal life under the Nguyen Dynasty.

There are 3 palaces of King Bao Dai: the First(I), the Second(II) and the Third(III). However, the third palace is the most crowded palace not only because it was where king Bao Dai was born, where he lived, worked, but also because it’s been preserved better than the other palace. The first and the second ones was where Bao Dai worked and held political meetings. Palace III is also the most visited attraction located on Trieu  Viet Vuong Street, 2km far from the center of city in the southwest. Palace III was the summer villa of King Bao Dai. After the French has let Bao Dai return to power since 1948 and established the "Reigning king's court" in 1950. The palace was called as “summer villa” since  the princess and prince as children were often playing here in the summer. The place had 25 bedrooms, 2 upper floors. The ground floor was used as a meeting space, banquet. The Portrait of King Bao Dai.

The building had been built from 1933 to 1938, designed by Huynh Tan Phat and a French architect. The Palace III  is considered as one of the most beautiful and elegant palaces in the middle of a pine forest. It’s tied to the architectural landscape parks, the Royal Garden, Ai An forest and a small lake, which is reasonable and romantic. The palace is located on a hilltop that in projects of digital embellishment Hébrard Dalat Palace for discretion. This hill is 1539m high, in Trieu Viet Vuong Street. The bedroom of King Bao Dai

With 2-floor structure, Bao Dai Palace also has a lot of different kinds of room such as: bedrooms, reception room, intimate sitting room, living room ... The design of the office of the palace is attached to the landscape architecture or exterior space to each other through the aisles and windows with steel frames, creating a harmonious setting between architecture and nature. When coming to the Palace III, beside visiting, tourists can be dressed into kings, queens, princes…, sitting on the throne and take photos. This is really an exciting experience for tourists visiting here. 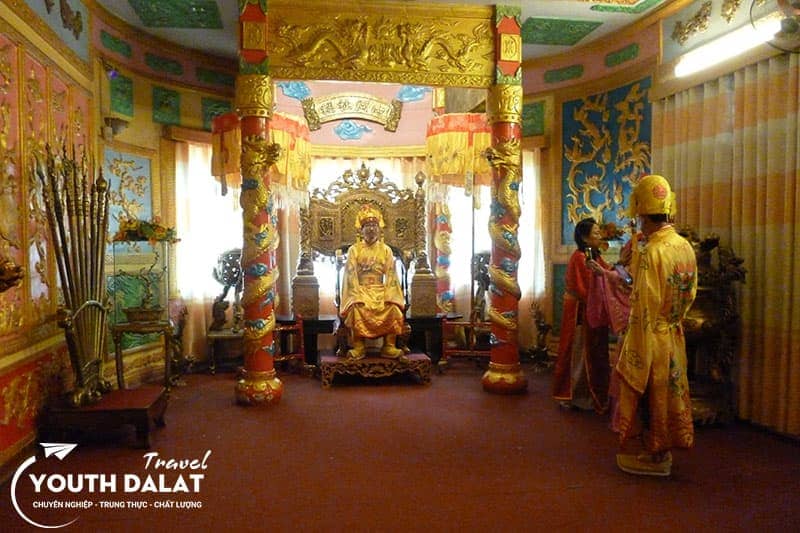 Tourists dressed up into kings, queens and take photos.

Everyday, Bao Dai Palace welcomes many visitors, most of them are tourists taking the tour of Da Lat. Admission is 20,000 VND / person. Children under 1m20 will be free. With such fare, visitors can enjoy visiting historical sites without worrying about money. Moreover, the campus outside the Palace also has shops selling clothings and beautiful souvenirs.

Since located on a high hill, the palace is covered around by pine, emerged with ancient architecture, which makes it poetic and romantic. It’s time to visit Bao Dai Palace to learn and see firsthand the ancient royal life in Vietnam.